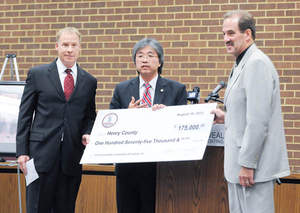 Commonwealth Laminating & Coating Inc. on Wednesday announced its second expansion in less than nine months. It will invest $5.45 million to expand its operation in Henry County, creating 60 jobs over about three years with average annual pay of at least $40,000.

The shell building, on lot 10 at the Patriot Centre, has 105,801 square feet of space and can be expanded to 195,801 square feet, according to information on the Martinsville-Henry County Economic Development Corp. (EDC) website.

Mark Heath, president and CEO of the EDC, reminded Commonwealth Laminating officials that there are 300 acres nearby if the company wants to expand even more.

The 60 new jobs must be in addition to the 120 full-time jobs at Commonwealth Laminating's facility at the Patriot Centre as of Nov. 1, 2011, plus the 40 additional full-time jobs promised by the company when it announced an expansion in November, according to the performance agreement. According to a Bulletin article, Commonwealth Laminating announced in November it will invest $16.5 million to expand its manufacturing operation in Henry County and that it would create 40 jobs over the next two to three years that will pay an average annual wage of $50,000.

Commonwealth Laminating is a manufacturing company with a strong emphasis on solar control window films and precision, high-performance coatings, according to the company website.

"This almost ensures we will continue to invest here," he said. As for potential future growth, he said each new machine costs $10 million plus, not counting building costs.

Phillips said the company has grown even during the recession. This year, the company expects to reach close to $100 million in sales, about half of it overseas, he said.

Commonwealth Laminating has its headquarters and does all its manufacturing at its existing facility at the Patriot Centre. It has a number of distribution centers around the globe, including in China.

"It was not our idea initially to make the investment," Phillips said, referring to the project announced Wednesday. "I've gone from cool to super excited," he said. He also said he has gone from considering expanding somewhere else to wanting to do it here and do it bigger.

Jim Cheng, Virginia's secretary of commerce and trade, presented a giant check for the $175,000 grant from the Governor's Opportunity Fund to Phillips, as well as a share of stock in the Virginia Company, which Cheng said was the entrepreneurial venture upon which Virginia was founded.

"The addition of 60 new jobs is particularly welcome news as the region rebounds from a recent plant closing," he said in a news release, and made similar remarks at the economic announcement ceremony in the Henry County Administration Building on Wednesday. "... We are committed to keeping southern Virginia on its upward economic trajectory and will continue to support the effort to bring jobs and investment to the area. Commonwealth Laminating is a valuable corporate partner to Henry County, and we are grateful for its continued commitment to Virginia as the company and its products grow rapidly."

The Virginia Tobacco Indemnification and Community Revitalization Commission approved $325,000 in Tobacco Region Opportunity Funds for the project. Through its Virginia Jobs Investment Program, the Virginia Department of Business Assistance will provide funding and services to support the company's recruitment and training activities, according to a news release from the governor's office.

According to a performance agreement for the Governor's Opportunity Fund, the Virginia Jobs Investment Program incentive amounts to an estimated $42,000. Other incentives from the commonwealth include an Enterprise Zone Real Property Improvement Grant (estimated) $100,000 and an Enterprise Zone Job Creation Grant (estimated) $176,000. That's a total of $818,000 in incentives from the commonwealth, including the $175,000 Governor's Opportunity Fund Grand and the $325,000 Tobacco Regional Opportunity Fund Grant, according to the performance agreement.

"The locality expects to provide the following incentives, as matching grants or otherwise, for the facility: ... donation of land upon which facility is located, $805,000; donation of a portion of the purchase price of the facility, $209,000; Local Enterprise Zone benefits (estimated), $119,480," the performance agreement states. That totals $1,133,480.

Deputy Henry County Administrator Tim Hall said the county also will extend natural gas to the site at a cost of about $105,000, using Tobacco Commission money that was saved on lot 2 at the Patriot Centre and $20,000 committed by the EDC.

Merricks called the project "a step forward for Henry County and Martinsville" at a time when the area has been making steps forward and backward. He said the project sends "a clear message to other companies" of excitement and confidence in Martinsville and Henry County.

According to a news release from the governor's office, Virginia successfully competed against Arizona and North Carolina for the project.