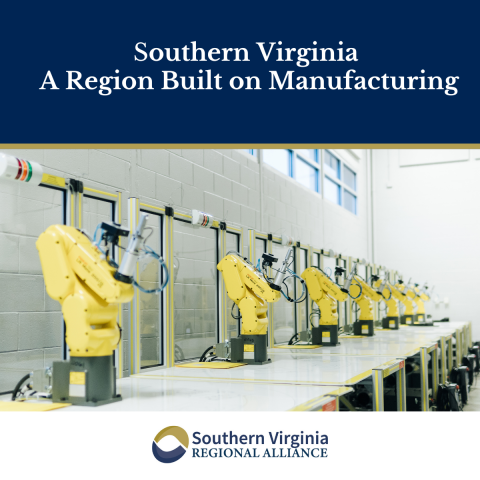 Eighteen percent of Southern Virginia’s labor force works in manufacturing, an industry that has been a central part of the region’s landscape for more than a century. However, as textile, apparel and furniture production moved offshore over the past several decades, many local factories closed. Southern Virginia, however, refused to cast aside its industrial heritage.

The cities of Danville and Martinsville, along with Pittsylvania, Halifax, Patrick and Henry counties, banded together to train workers to participate in a new generation of manufacturing, with a focus on advanced technologies, including robotics, mechatronics, precision machining, computer coding and automation. Along with community college and tech center programs, trade skills have been integrated into local schools’ K-12 curriculum, with dual enrollment courses leading to advanced certifications for high school graduates.

“We’ve invested in workforce programs highly desired by industry,” Rowe says, noting that Pittsylvania and Danville have earmarked more than $70 million for workforce training over the past decade. “The community asked industries what they needed and put significant resources into meeting those needs. Having those skill sets is highly valued by industries. It’s not only kept businesses in place, but it’s helped attract new businesses.”

Corporate investment is surging in Southern Virginia as firms take advantage of available land and talent. During the past six years, new and expanding industries have invested more than $700 million in capital projects and brought 3,200-plus jobs to the region. Much of that largesse has occurred at Cane Creek Centre, an industrial park co-owned by Pittsylvania and Danville; about 1,500 new jobs have been created at the park since 2018. Companies that have moved into Cane Creek in recent years include North America’s largest step van manufacturer, Morgan Olson LLC; indoor vertical produce grower AeroFarms; and Walraven Inc., a manufacturer of installation systems for plumbing and mechanical applications that moved its U.S. headquarters and manufacturing operations from Cadillac, Michigan, to Danville.

Next summer, Tyson Foods will bring nearly 400 jobs to the region when it opens its $300 million, 325,000-square-foot plant at Cane Creek. The food production facility marks the largest economic development project in Pittsylvania to date. While Southern Virginia boasts a central location and lower costs for utilities, labor, raw materials, taxes and real estate than many other U.S. locales, the region’s workforce training program was a major factor in Tyson’s decision to build in the region.

“Tyson saw the technical skill sets we’ve developed and adjusted plans for their facility and made it more automated and technologically advanced,” says Corrie Bobe, Danville’s economic development director. “The average wage increased, compared to what was originally planned. That’s a large success for our community.”

The region’s focus on preparing students for the manufacturing workforce was key to Tyson choosing to build in Southern Virginia, says Nancy Frank, plant manager of Tyson Foods Danville. “We’ve partnered with area high schools [and] community colleges, including Danville Community College, to offer a new maintenance technology training program and made significant local and state investments in training programs and facilities across the region to help find highly skilled workers and create pathways for employment for our future team members.

“There’s a rich manufacturing heritage in the region,” says Telly Tucker, the institute’s president. “Legacy manufacturing has defined Virginia for over a century, but when industries that supported the region for generations were no longer able to do that, we began investing in new technologies and new training to be relevant and make the region more attractive for industries. That provides opportunities for better quality of life for our residents.”

Tucker joined the institute in May after serving as Arlington County’s economic development director since 2020. He previously held the same position in Danville for six years. “I was surprised by how much has happened in the two-and-a-half years since I left,” Tucker says. “I’m just really thrilled and proud seeing the new energy and excitement. It’s been very much a regional effort with a significant investment of capital in schools to provide the next generation of Southern Virginia citizens with opportunities to gain skills in targeted sectors.”

Troy Simpson, who was the institute’s director of advanced manufacturing before retiring this summer, adds that as technology becomes more advanced, workers are compelled to become proficient in more complex skills. “We want to make sure we give the next generation the tools to compete,” he says. “Before we can recruit companies into the region, we have to demonstrate that we have a workforce that can support that type of manufacturing.”

Simpson, who spent 31 years in workforce development, initially wanted to be a tobacco farmer like his father, but as the industry waned, he enrolled in a community college machinery program. “I recognized what skilled training can do for people in rural areas to change the trajectory of their lives,” he says.

He also recalls the region’s economic decline after Dan River Mills, a textiles manufacturer that was once the town’s largest employer, closed in 2006. “That was painful to watch,” Simpson says. “We have a manufacturing DNA, but obviously manufacturing has changed, and we had to change.”

Simpson points to the Accelerated Training in Defense Manufacturing pilot program as a way Southern Virginia has shifted gears. The product of a public-private consortium involving IALR, Danville Community College, Phillips Corp. and Alexandria-based strategic consulting firm The Spectrum Group, the program gives the region a chance to play a larger national role in the defense industry while developing a new shipbuilding work force.

“By 2025,” Simpson says, “we will train 1,000 people yearly to build submarines and work in the supply chain building hardware and components needed to build naval systems.”

“That’s the beautiful thing about what we’re seeing now,” Tucker says. “Technology has completely changed every industry sector. Skill sets taught in the region can be applied to all sectors, and students have the opportunity to work in a plethora of places, based on where their interests lie.”

IALR plans to open the $25.5 million, 51,250-square-foot Center for Manufacturing Advancement by the end of the year. Funded by the state, the center will provide training and space to integrate emerging and new technologies such as additive manufacturing and CNC (computer numerical control) manufacturing. There also will be rapid launch spaces that companies can lease while their factories are under construction. The initial 14,100-square-foot Rapid Launch Facility opened on the IALR campus in 2020 as an incentive to persuade companies to invest in Southern Virginia.

“Having access to the Rapid Launch Facility allowed us to start making parts right away,” says Richie Barker, chief operating officer of FasTech LLC, a Danville-based metal additive 3D and milling services provider for parts manufacturing. “This is a stepping-stone for when we either build or procure our next building.”

Production facilities combined with highly trained workers made it a “no-brainer to come to Danville,” Barker adds. A spinoff of a United Kingdom company, FasTech employs workers trained in advanced manufacturing through a collaborative effort between IALR and Danville Community College. “That’s a huge, fantastic pipeline of individuals … to support our customer base. I’ve never seen anything as good.”

Meanwhile, Old Dominion University is developing a bachelor’s degree program in manufacturing engineering technology. A full-time ODU faculty member will be based at IALR, which will serve as a satellite campus for the program. Students will be able to transfer into the program from community colleges, IALR’s Academy for Engineering and Technology, and career and technical dual-enrollment programs.

In addition, Patrick & Henry Community College in Martinsville is developing a corresponding associate degree in manufacturing engineering technology that will allow students to either transfer to ODU to complete their bachelor’s degree or proceed directly into the workforce.

“Offshore wind is one of the most exciting emerging targeted industry opportunities we have,” says Jason El Koubi, president and CEO of the Virginia Economic Development Partnership. “It’s a very strong emerging cluster in Hampton Roads, but there are potential benefits for other parts of the commonwealth that want to participate in the supply chain.”

Southern Virginia aims to play an active role in that supply chain, says Linda Green, executive director of the Southern Virginia Regional Alliance. “We’re looking for companies that have tentacles in the community and can be part of the supply chain. Our workforce already has a lot of skill sets needed for new industries.”

Manufacturing is Virginia’s fifth-largest private sector employer and the third-largest contributor to the state’s total economic output, El Koubi notes. In 2019, the state’s manufacturing output totaled $45 billion. It’s also among Virginia’s 10 highest-paying industries, with estimated average annual worker salaries exceeding $80,000. “For rural communities that do not have a substantial white-collar workforce, manufacturing provides some of the most attractive opportunities,” he says.

“Southern Virginia was built on manufacturing,” El Koubi says. “It offers strategic access to markets, a skilled talent pool, innovative workforce training [and] a strong infrastructure, including freight rail, a strong highway system and direct access to the Port of Virginia.”

Many of those positions are with Hitachi Energy, Halifax’s third-largest employer, which plans to hire about 265 workers during the next two years for its transformer factory in South Boston. “We’re looking to serve new and growing markets, so we’re increasing our capacity at this site,” says Hitachi’s community relations and engagement manager, Ryland Clark.

Geography and the workforce have kept Hitachi in South Boston since 1968. “We’re close to everything, and there are a lot of people in the area who know about transformers, so that knowledge has kept us here,” Clark adds.

Those skill sets are also keeping those who grew up in the region close to home, says Pittsylvania County’s Rowe. “There’s a huge demand for these positions, so when students graduate, they get multiple job offers. That changes people’s lives and allows them to go up the economic ladder.”

It’s also allowing IALR’s Simpson to achieve his careerlong dream as he enters retirement. “I’m able to retire in a happy place seeing people training and staying here and competing for high-quality
jobs.”