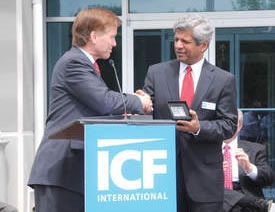 State officials praised ICF International's rapid success in Henry County during a dedication ceremony for its new building on Monday.

Thirteen months ago, ICF announced it would open a business operations center in an approximately 100,000-square-foot building in the Patriot Centre industrial park, representing a $15 million investment. The building has since been erected, and 173 people work there. The company expects to have more than 500 on its payroll within two years.

"ICF has significant plans to utilize this facility for the long term," Sudhakar Kesavan, chairman and CEO of the company, told several hundred people gathered outside the facility Monday.

"This is a cause for tremendous celebration," Gov. Bob McDonnell said before he and Lt. Gov. Bill Bolling took part in a ribbon-cutting.

ICF could have expanded anywhere, but it chose Henry County because its executives "know this is a great place to do business," Bolling said.

When high-tech firms based in Northern Virginia — such as ICF — look for places to expand, "there is no better place for them to go" than Southside, McDonnell said.

That is due to factors such as a good quality of life, support from state and local officials, and efforts by area schools and higher education institutions to ensure the local work force is well trained, state and ICF officials said.

Virginia is regarded by many in the economic development field as the best state in which to do business, McDonnell said.

Henry County-Martinsville has a "terrific business climate," Kesavan said after the ceremony. He mentioned low real estate costs and "the people here" — a quality work force — as factors.

Also, "the enthusiasm that government officials exhibit (to help businesses locate) here is extraordinary," he said.

In doing so, "we really want to replicate this model" in which a company such as ICF can build a new facility and get it up and running quickly, he said.

Kesavan said ICF is "proud to (help) provide for the continuing revitalization" of the Henry County-Martinsville economy.

Based in Fairfax, ICF provides various professional services to its clients, ranging from market research to processing energy-efficiency rebates.

McDonnell said ICF's success locally can serve as a blueprint for other high-tech companies to set up operations in Southside and improve the region's economy, which he said has faltered in recent years because of the loss of many textile- and tobacco-related jobs.

With help from Heath and other officials, "we've been able to accomplish some good things" already in terms of attracting businesses and industries, "but we're just getting started," Bolling said.

Bolling noted that when McDonnell became governor 27 months ago, the statewide jobless rate was 7.2 percent. Since then, state and local officials statewide have closed more than 700 economic development deals that brought more than 120,000 new jobs to Virginia, he said.

The unemployment rate has since fallen to 5.6 percent, he said.

Yet Martinsville's unemployment rate is roughly triple that so economic development efforts must not stop, officials said.

"We must not become complacent" in economic development efforts, said Merricks. In improving the local economy, he said, "we may have won a few battles, but the war is not yet won."