IT firm moving to Danville 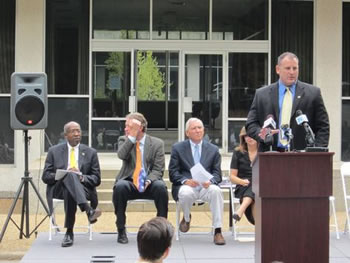 “We are gathered here this morning to celebrate resurrection.”

So began the invocation offered Friday by Bob Norton, whose son Tim Norton is bringing the IT company Norhurst to Danville.

Norhurst will invest $2.3 million and employ 108 people with an average salary of $67,000. The company installs and teaches the use of software such as PeopleSoft, among other services.

The Tobacco Commission has granted Norhurst $625,000 to assist with the building’s renovation. It has suffered significant neglect: The doors have been unlocked, ceilings have fallen, windows have been broken and carpeting is water-damaged. Thieves stole valuable wiring.

Michael McNeely, a Norhurst employee who is helping with the fix-up, said Dan River left behind phones, some furniture and memorabilia.

“Vandals were taking the awards and chunking them out the windows,” said Michael McNeely, a Norhurst employee who is getting the building ready for occupancy.

The announcement was celebrated Friday with a luncheon in the building’s cafeteria — in the dark.

Jason Grey, network manager for the city, worked for Dan River for five years in its executive offices. He said the building is connected to Danville’s fiber optic network, giving Norhurst access to unlimited bandwidth. The computers in the basement ran Dan River’s multiple locations.

“It’s pretty much ready to go once they get their internal renovations done,” Grey said.

Tim Norton said the mid-century modern building is a diamond in the rough.

“The footprint is absolutely perfect for our IT services company,” he said.

Norton is hoping that 60 to 70 percent of the company’s Northern Virginia workforce will make the move to Danville.

Wilkins and Co. Realtors are sending promotional packets and videos to Norhurst employees to introduce them to the area.

Norton said he hopes to set up a customer help desk center in Danville that would allow them to remotely access customers’ computers and fix them.

“We’ve never had that opportunity in the past,” he said.

He could not say, however, how many new positions would be created.

Norton says IT is the business to be in right now. After leaving the U.S. Army, he went into IT after seeing how lucrative it could be.

“Every single business, school and grocery store is using computers,” he said.

“It’s a very good business to be in,” he said. “But you have to know what you’re doing. You have to have good people. And they have to be happy.”

Daville Mayor Sherman Saunders said these are the types of jobs possible for Danville residents if they’re willing to do what it takes.

“If you are under 60 years old, go back to school,” he emphasized in his speech. “Upgrade your skills for jobs like these.”