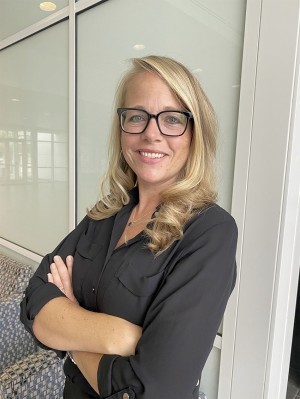 After completing a national search for a new executive director with the help of an outside consulting firm, the Halifax County Industrial Development Authority has chosen to promote from within, naming Kristy Johnson to the post.

Johnson takes over as IDA executive director from interim director Mike Davidson, a retired Campbell County economic development official who took over leadership of the IDA after the firing of former executive director Brian Brown in the fall of 2020. In her new post, Johnson will be paid $115,000 annually.

Johnson’s hiring comes after the IDA retained Jorgenson Consulting of Greensboro, N.C. to conduct the executive search. The IDA received 28 applications for the position, winnowing that number to four by April and identifying one candidate for consideration.

On Friday, the IDA announced the hiring of Johnson, a Halifax resident who has worked for the IDA for more than ten years, most recently in the newly created role of IDA liaison to Davidson. She has held several positions within the IDA, including Operations Manager, Manager of Marketing and Business Development, Deputy Director and Interim Executive Director.

She takes over as executive director on Sept. 15.

“I look forward to the opportunity to serve Halifax County in this capacity. I am excited to continue my work with the IDA in this new role and working together to better our community,” said Johnson through an announcement of the hiring distributed by the IDA.

Robert Bates, IDA Board Chairman, said, “Assisted by Jorgenson Consulting, we had a strong pool of candidates and Mrs. Johnson impressed both the Search Committee and the IDA Board with her experience, understanding of Halifax County, and her approach to building our community through economic development. We look forward to welcoming Kristy back as a member of our organization.”

In her role as executive director she will be responsible for directing the operations, programs, and projects of the Halifax IDA. Her first priority will be to deploy and manage a comprehensive plan for economic development, including business recruitment, retention and expansion programs. The Executive Director’s responsibilities also include managing and marketing the IDA’s inventory of land and buildings.

Interim director Mike Davidson, who served as director of the Campbell County Economic Development Department before his retirement in August 2020, said Johnson will be a great asset to the organization and that she and IDA Operations Manager Blair Jeffress will make a great team.