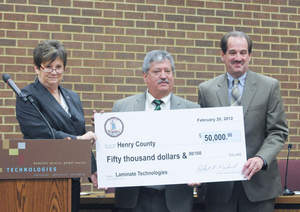 The improving economy, the skills of Henry County-area workers and the assistance of governments and the Martinsville-Henry County Economic Development Corp. were the key factors in Laminate Technologies' decision to open a plant in Henry County that will create 30 jobs.

In addition, "the people have been overwhelming ... like family," said Fred Zoeller, co-founder, president and chief executive officer of the company, which goes by "LamTech."

On Monday at the Henry County Administration Building, Zoeller announced that LamTech plans to invest more than $2 million to establish a local plant and create 30 jobs in the former Owens-Corning building in the Martinsville Industrial Park south of the city.

Mark Heath, president/CEO of the EDC, and County Administrator Benny Summerlin each said LamTech paid about $1 million for the Owens-Corning building, for a total expected investment of $3 million.

Owens-Corning closed here in 1998, resulting in a loss of 117 jobs. The plant has been used for storage at times since then.

This is the first supplier for MasterBrand to locate here that he knows of, Summerlin added.

LamTech hopes to begin hiring for maintenance work immediately and hopes to be doing assembly work in late summer or early fall, according to Randy Wiser, vice president of operations.

Lisa Lyle of the EDC said LamTech will work with the Martinsville-Henry County Chamber of Commerce's Business Services Department on employee recruiting.

Zoeller said in addition to maintenance workers to be hired this month, LamTech will look to add five to seven employees at the end of March and 10 more at the end of April. It will take eight people to run its line on one shift, he said, adding that support people will be added gradually.

LamTech will be looking to hire operators, mechanical, electrical and laminating staff, and others, Wiser said. Zoeller added that employees — who are called team members — need a good work ethic and little or no absenteeism.

Workers without skills will be hired at around $11 or $12 an hour, Zoeller said. CNC (computer numerical control)-skilled employees will be hired in the $13- to $15-an-hour range, and operators can earn $18 to $20 an hour after a probationary period, he said, adding that the company tries to pay slightly above the middle level of wages in an area.

LamTech, with corporate offices in Tiffin, Ohio, conducted a three- to three-and-a-half-year search for its fourth location. The company "waited until the economy got right" to expand and spent a lot of time looking for a site in North Carolina, where it does a lot of business, Zoeller said.

Before making a final decision, Zoeller said, he told his staff to "turn over every stone" to make sure they had the right location.

"Martinsville was the one last stone," he said, praising the help the company received from the EDC and others.

Originally, Bob Elmore of MasterBrand Cabinets put LamTech in touch with Jim Frith of Frith Construction. When Frith's facility did not work for LamTech, Jim and Jay Frith suggested the company talk to Larry McDorman, who owned the Owens-Corning building, Heath said. That, he added, illustrates the community's team approach to making a deal work. 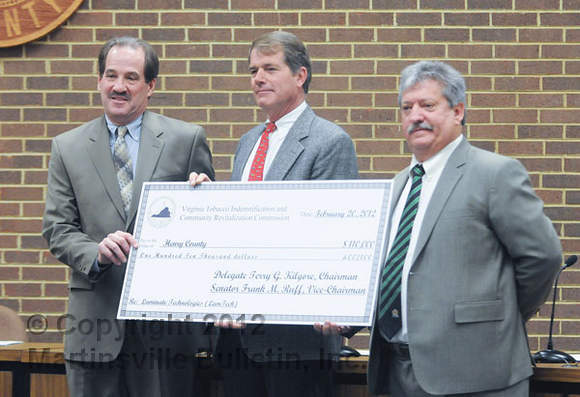 "Because of the team effort of Henry County and Virginia, LamTech is very pleased to call this home," he said, adding that the business is run like a family. "I can see that Martinsville and Henry County are our kind of folks."

LamTech also needs rail access, and it is working with local officials to find a place where it can unload product and transfer it to trucks. Henry County has agreed to pay up 50 percent of the cost of constructing a platform for a site, up to $25,000, Summerlin said. He added that constructing such a platform could cost the company $50,000 to $100,000.

Zoeller said that rail access will allow LamTech to expand its markets, which could lead to an expansion of the employment of the Henry County plant. He added that he hopes to double the plant's capacity and its number of employees in five years.

The Virginia Economic Development Partnership worked with the EDC to secure the project for Virginia. Gov. Bob McDonnell approved a $50,000 grant from the Governor's Opportunity Fund (GOF) to assist Henry County with the project, and the Virginia Tobacco Indemnification and Community Revitalization Commission approved $110,000 in Tobacco Region Opportunity Funds for LamTech.

Through its Virginia Jobs Investment Program, the Virginia Department of Business Assistance will provide funding and services for LamTech's recruitment and training activities.

Carter observed that in her two years in office, she has been to more announcements in the Henry County-Martinsville area than any other area in rural Virginia. Heath also noted that in his six years at the EDC, the Governor's Opportunity Fund and tobacco commission have contributed a total of $20 million to projects here

The Henry County Board of Supervisors and Industrial Development Authority unanimously approved performance agreements for the grants earlier Monday.