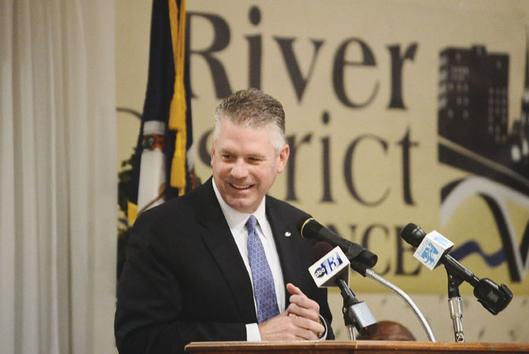 from GoDanRiver.com - by Tiffany Holland

Linwood Wright remembers the hustle and bustle that used to fill the halls of Dan River Inc.

Wright, like thousands of others, have seen the place that once reverberated with life in downtown Danville slowly morph into an empty, dilapidated building like a ghost that haunts the city, reminding people of things that once were.

But Friday, people could only talk about things that are about to happen. With more than 100 in attendance, the Office of Economic Development announced the former Research Building of Dan River Inc. will be redeveloped by the River District Development, LLC to house Danville Orthopedic Clinic, Danville Regional Medical Center offices, new commercial businesses and a new restaurant.

For Wright, who works in the economic development office, this transition has a special meaning.

Dr. Mark Hermann, an orthopedic surgeon with Danville Orthopedic Clinic and a principal member of RDD, said he was looking to move the clinic for years since it was outgrowing its space and the Dan River Inc. research facility was a beautiful, historic building that caught his eye.

"I moved here 22 years ago and I always thought it had such mass potential," said Hermann. "So many places that were just dilapidated but you could still use. You don't have to build anything."

Hermann emphasized this move does not just involve doctors, but it is a collaborative effort from people in the region to create a thriving place where people want to live.

"The design of the River District Tower will tell a story of a community that respects its past while at the same time is forging a future," said Hermann. "It should scream out that the Dan River Region is back."

The second floor will host DRMC practices and teaching centers and the ground floor will contain multiple lease-able spaces for various businesses. The three section attachment will boast an upscale restaurant overlooking the Dan River.

One of the restaurant's developers, Hal Craddock, compared what Danville is doing to what he has seen in Lynchburg. He said Lynchburg committed $20 million over 20 years to a new master plan in 2000 and 12 years later, it has leveraged $100 million in private sector investment.

Craddock referred to River District Tower's development as a "game changer" and he wants the restaurant to be easily accessible downtown.

River District Development is investing $14.5 million into the project. The Virginia Tobacco Commission has also provided $250,000.

In addition, the Industrial Development Authority of Danville purchased the Acrees Warehouse and is converting it into a parking facility directly across from Bridge Street to the main building. The Governor's Industrial Revitalization Fund approved $600,000 for the parking facility through the Virginia Department of Community Development.

"With this reinvestment ... not only will the original structures be preserved and brought back to life but they will fuel investment in the River District and improve health care access to the region," said Lisa Atkinson, the Deputy Director of Community Development.

Larry Hasson, a senior architect at Dewberry, presented pictures of how the River District Tower will look. He said for the next four months construction crews will mostly be cleaning the inside of the building out and work will be done on the interior. He and Dewberry interior designer Dodie Hudson said the historic structure and outside of the building will mostly remain the same and the interior will have a contemporary setting with respect to the history of the building.

Hasson hopes the project could be completed by the end of next year.