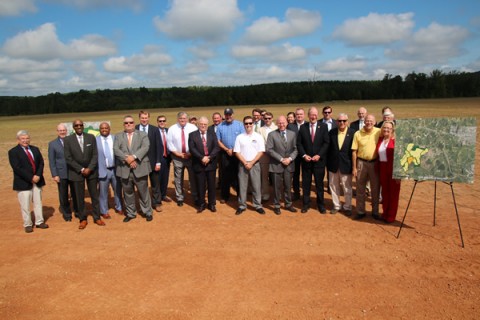 The “infrastructure ready” certification is the fourth of five tiers required to ultimately reach “shovel ready,” or tier five, status in the industrial park. According to the tier four requirements of VEDP’s Virginia Business Ready Sites Program, all infrastructure is in place or will be delivered within 12 months, and all permit issues have been identified and quantified. Tier five will be completed as the last step when industry site occupants are identified and permits are in place. There are several active projects currently considering the site, Danville Economic Development Director Telly Tucker shared.

“Virginia is aggressively seeking to maintain its position as the preferred state for business, and today’s achievement is an illustration of the support our area is receiving as another step toward meeting this goal,” said Linda Green, Executive Director of the Southern Virginia Regional Alliance. “We are proud to earn certification of the mega site as ‘infrastructure ready’ and thank the Virginia Economic Development Partnership and Secretary of Trade and Commerce for their integral roles in helping us achieve this significant milestone. Countless other partners helped us through the process; just some include: the Regional Industrial Authority, Pittsylvania County, the City of Danville, Danville Industrial Development Authority, our elected officials and other key leaders.”

The Southern Virginia Mega Site at Berry Hill includes 3,528 acres and boasts 12 industrial lots ready to accommodate a single user or ready for subdivision to suit, with the largest contiguous lot acreage exceeding 2,000 acres. The mega site hails as the largest such industrial park in the Commonwealth of Virginia and is one of only seven to achieve tier four certification. Currently, there are no tier five sites in Virginia. With proximity to major transportation routes, partners with temporary rapid launch space, potential suppliers and a sought-after advanced manufacturing talent pipeline, the industrial park clearly rises as a viable, leading option for top industry contenders and Original Equipment Manufacturer (OEM) operations, particularly within the automotive and aerospace sectors.

Ball, Moret, members of their staff and economic developers also toured the Danville River District on Friday to showcase revitalization efforts completed to date. Tucker shared the work accomplished as part of a redevelopment project to benefit the downtown Danville area known as the River District, which has served as the commercial and administrative heart of the city since the 1790s. Improvements include streetscape enhancements like new sidewalks, brick pavers, streetlight poles, benches and landscaping; public, outdoor Wi-Fi hotspots; wayfinding signage; utilities upgrades; additional parking; and new amenities like the JTI Fountain, Main Street Plaza and a new trailhead and connector for the Riverwalk Trail. Public seeding has resulted in the purchase of once vacant, deteriorating buildings. The district has attracted its first brewpub, Ballad Brewing, as well as several other newer businesses like Cottontail Weddings and Events, Mucho Taqueria, Cotton at Riverside Mill and others.