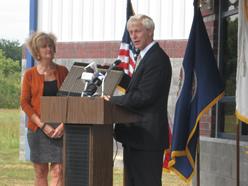 Ringgold, VA (September 30, 2011) Governor Bob McDonnell today announced that Axxor Group, a Netherlands-based company that designs, produces, and sells honeycomb made from paper and water-based glues, will invest $4.96 million to establish its first U.S. operation, Axxor N.A., in Pittsylvania County. The company, which will be located in the Ringgold East Industrial Park, will enter the U.S. market to supply honeycomb core that is used in IKEA subsidiary Swedwood North America's product line. Swedwood North America is located in nearby Cane Creek Centre, an industrial park jointly developed by Pittsylvania County and the City of Danville. The project will create 31 new jobs. Virginia successfully competed against North Carolina for the project.

Governor McDonnell met with officials at Axxor Group in the Netherlands during his European Marketing Trip in July 2010.

Speaking about the announcement, Governor McDonnell said, "Swedwood North America was a transformational project for Southern Virginia, and Axxor Group's investment in Pittsylvania County is an outgrowth of that partnership. When any company establishes a large operation in Virginia we immediately strive to use their presence to draw potential suppliers to the same area. That is what has happened here. Axxor N.A. will supply a component used in IKEA products made at nearby Swedwood. As its first U.S. operation, Axxor Group will now be able to impact the North American market. Announcement's like today's are how you, project by project, build a dynamic, interconnected and thriving regional economy. And the result is more good jobs for our citizens."

"The Governor and I met with Axxor Group in the Netherlands last summer during his European Marketing Mission, and discussed potential investment in Virginia," said Jim Cheng, Virginia Secretary of Commerce and Trade. "It is gratifying that this announcement is a product of that meeting, and we warmly welcome Axxor N.A. to the Commonwealth."

Dutch engineer Wieger Wiegersma started Axxion Industries in 1991 in Holland. Axxor developed the continuous honeycomb production system step by step into the Single Step Core system of today, called the Axxor SSC system. This system is capable of producing honeycomb in an extremely efficient way with all means of process-controlled production. Today the Axxor Group is selling to a majority of the door industry, the furniture industry, automotive suppliers, construction material producers and packaging companies. The Axxor Group partnered with U.S. entrepreneur Robert Boerrigter, who will lead Axxor N.A.

"We at Axxor N.A. are very pleased to establish our base in Virginia," said Boerrigter. "The proximity and our commitment to Swedwood were our starting point, and the proactive and professional business environment that Virginia offered heavily influenced our final decision. In addition to Swedwood, we expect to be serving many other businesses and industries from this facility."

The Virginia Economic Development Partnership worked with Pittsylvania County to secure the project for Virginia. Governor McDonnell approved a $50,000 grant from the Governor's Opportunity Fund to assist Pittsylvania County with the project. The Virginia Tobacco Indemnification and Community Revitalization Commission approved $100,000 in Tobacco Region Opportunity Funds for the project. The company is eligible to receive benefits from the Virginia Enterprise Zone Program, administered by the Virginia Department of Housing and Community Development. Through its Virginia Jobs Investment Program, the Virginia Department of Business Assistance will provide funding and services to support the company's recruitment, training and retraining activities.

"Pittsylvania County is extremely pleased with Axxor N.A.'s decision to locate their North American manufacturing plant in the Ringgold East Industrial Park," said Tim Barber, Chairman of the Board of Supervisors. "This project has taken almost two years, but Axxor N.A. and the Economic Development office continued to overcome the obstacles and bring it to reality. This is also a fine example of the commitment of the Board of Supervisors to economic development and job creation. The bottom line is that Axxor N.A. will add to the County's tax base, occupy a vacant building, and bring much needed employment opportunities to the citizens of Pittsylvania County and Danville."

"This is another great day for Danville, Pittsylvania County and Virginia," said Delegate Danny Marshall, a member of the Virginia Tobacco Indemnification and Community Revitalization Commission. "Thanks to Axxor for bringing 31 new jobs and $4.96 million in investment to our area."

"Today's announcement that Axxor Group will establish its first U.S. operation in Pittsylvania County is great news for Southside, and I want to thank Governor McDonnell for his leadership and work on this project," said U.S. Rep. Robert Hurt (VA-5).  "This investment will help create 31 new jobs in the area at a time when we need it most and is another positive step forward as we all work to get our economy back on track."