What will it take to grow manufacturing in Virginia? 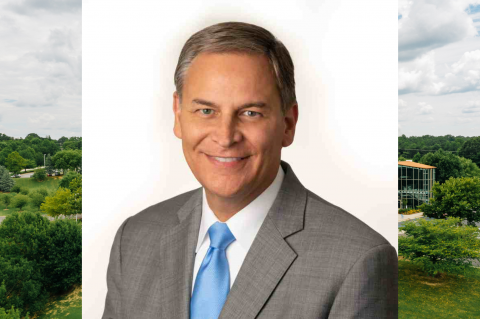 Cardinal News brought Jay Timmons, president and CEO of the National Association of Manufacturers, to Danville to speak about the future of advanced manufacturing.

Workforce investment is key in bolstering the advanced manufacturing industry, the president and CEO of the National Association of Manufacturers said Monday in Danville.

Areas that want to invigorate their manufacturing, like Danville and the surrounding Pittsylvania County, need to grow the talent pool and invest in people. That’s how you attract leading manufacturers, Jay Timmons said.

“Workforce is the most important asset,” he said. “That’s the secret ingredient and manufacturers across the country know that.”

Timmons spoke to more than 100 people at Danville’s Institute for Advanced Learning and Research as part of the Cardinal News speaker series.This was the second event in Cardinal News’ speaker series. The first brought Rep. Ro Khanna, D-California, to Blacksburg in June.

NAM, the group Timmons heads, is an organization that represents 14,000 manufacturers across the country from all industry sectors. It employs almost 13 million Americans and advocates for policies that encourage manufacturing.

The City of Danville, an old manufacturing town that has seen the departure of both tobacco and textile, was an apropos location. The city and county are both invested in the topic of the event – the future of advanced manufacturing,

This area can have a bright manufacturing future, Timmons said.

“This absolutely can be a manufacturing decade,” he said. “But we have to make the right choices today.”

There have been more than 860,000 open manufacturing positions each month on average over the past year, Timmons said. And by the end of the decade, more than 2 million manufacturing jobs could go unfilled.

This would cost the economy $1 trillion in 2030 alone. This data is according to research by Deloitte and the Manufacturing Institute, the nonprofit workforce development and education arm of NAM where Timmons is chairman of the board.

These stats stress the importance of investing in a workforce, Timmons said. NAM and the Manufacturing Institute have launched programs to do this – and so have Danville and Pittsylvania.

Coincidentally, NAM and Danville and Pittsylvania have taken a similar approach. They both focus on outreach to different localities to fill the skills gap and correct misinterpretations about modern manufacturing among young people.

NAM does this through a program called Creators Wanted, a campaign to build a manufacturing workforce for the future.

“It’s actually a road show that goes into communities all across the country,” Timmons said. “It’s a triple-wide tractor-trailer.”

Creators Wanted visits communities and introduces the younger generation to high-tech, hands-on careers that they may have never considered before, he said.

“It gives young people a taste of what manufacturing’s all about,” Timmons said. “You see them come out really excited and exhilarated about a future career in manufacturing.”

This is much like the GO TEC program that began in Danville and Pittsylvania in 2018, which introduces middle school students to manufacturing careers and skill sets.

Danville’s Institute for Advanced Learning and Research has helped this program grow to 25 middle schools across the state. These middle schools have an in-house lab with manufacturing equipment like milling machines, 3D printers, laser cutters, and a welding simulator.

There’s even a GO TEC bus, similar to the Creators Wanted tractor-trailer, that takes manufacturing equipment to different localities in Virginia to teach students and teachers about these career opportunities and encourage them to join the program.

Jake Taylor, GO TEC’s technical and training manager, said he’s taken the bus to localities in Southwest Virginia and as far as Portsmouth.

This means that Danville and Pittsylvania County are ahead of the game on at least one of Timmons’ recommendations: investing in a workforce.

But Timmons listed other boxes that need to be checked at the regional, state and national levels to ensure that manufacturing thrives.

“While industry is doing everything we can to make this the manufacturing decade, we also have to have decisive action from policymakers,” he said.

In addition to investment in the workforce, policy that encourages manufacturing is a huge factor in growing the industry.

“Southern Virginia and Southside Virginia have a history of fostering strong manufacturing communities,” Timmons said. “That legacy can be, as you know, disrupted by policies that harm our ability to compete in a global marketplace.”

The industry is facing supply chain disruptions, the highest level of inflation in decades, and fierce global competition, Timmons said.

He also referenced the CHIPS and Science Act, which Congress passed this summer with the goal to grow semiconductor manufacturing in the United States. Semiconductors are the second biggest export in Virginia, as of 2021, Timmons said.

“Frankly, it’d be great to see Southside declared as one of these hubs,” Timmons said.

Sen. Mark Warner, D-Virginia, one of the champions of this legislation, also said he’s committed to having semiconductor factories in Virginia during his August visit to Danville.

“It’s virtually impossible to have an aging and shrinking population and still grow the economy in a way that improves peoples’ lives,” Timmons said. “Immigration is one solution.”

Providing an appropriate and balanced pathway to legal immigration is the right thing to do in a country that’s always been a nation of immigrants, but it’s also going to meet our economic needs, he said.

“Remember those 860,000 jobs,” Timmons said. “There are 12 million jobs economy-wide that are open right now.”

If we don’t welcome more legal immigrants, he said, their talent will go to other countries, taking away sales from American companies, and the population will likely shrink further.

After his talk, Timmons met with local leaders to learn more about the region, which included information briefs on GO TEC, the Southern Virginia Mega Site at Berry Hill, the Accelerated Training and Defense Manufacturing program – a partnership with the Department of Defense to create a shipbuilding workforce.

He then took a tour of the Institute, which finished at the Charles R. Hawkins Engineering and Industrial Technologies Building, home to IALR’s advanced manufacturing division. The building is designed to replicate a real-world manufacturing experience with high-quality and relevant equipment.

“Every 18 months, all the equipment here goes out and new updated equipment comes in,” Timothy Robertson, chief operating officer of the manufacturing department, told Timmons during the tour.

Timmons said this is incredibly unique. Usually, labs where students learn manufacturing skills have equipment that is handed down from companies, often five or 10 years old, he said.

It’s important for students to see the high-tech equipment, to correct the stigma that manufacturing is dirty and antiquated, agreed Timmons and Telly Tucker, IALR president.

Later in the day, Timmons attended the ribbon cutting ceremony for AeroFarms’ Pittsylvania County location, to highlight the connection between advanced manufacturing and food and beverage production. AeroFarms’ new operation is the largest indoor vertical farming facility in the world.

During the tour of IALR, Timmons told Cardinal he was very impressed with the manufacturing efforts in Danville and Pittsylvania.

“The communities that are going to be successful in the future are the ones that are investing right now in this type of economic architecture,” he said. “It’s really hard for a lot of communities to think about investing in these types of resources or the time commitment that it takes. But you have to be farsighted, and that’s what will produce the winners of the future.”

Tucker asked Timmons about communities to benchmark against as far as manufacturing advancement during the regional brief.

After seeing the efforts of IALR, Danville Community College, the area’s economic development, and other organizations, “I have a feeling some communities will be asking to benchmark against Danville,” Timmons said.