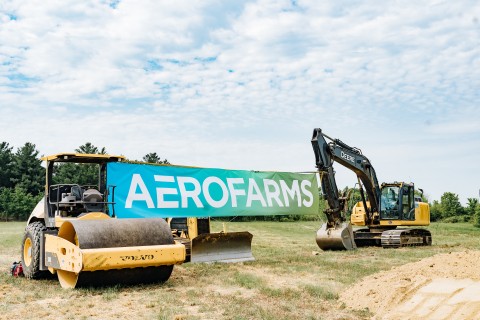 The ribbon cutting for Pittsylvania’s AeroFarms facility will be this afternoon, signifying the end of the construction phase for the New Jersey-based indoor vertical farming company. AeroFarms says this operation will be the largest of its kind in the world.

The 140,000-square-foot facility is a $42 million investment, located in Cane Creek Centre, a joint industrial park owned by Danville and Pittsylvania County.

AeroFarms has already started growing and selling out of its Pittsylvania location, and the ribbon cutting is an official grand opening for the site.

But what exactly is indoor vertical farming? And how does it fit into the agriculture industry?

Indoor vertical farming is a subset of something called controlled environment agriculture. CEA is a technology-based approach to farming, where factors like temperature, humidity, airflow, light intensity and duration, and water supply can be controlled to try to produce optimal conditions for growth.

Familiar examples of controlled environment agriculture include greenhouses and hydroponics.

Indoor vertical farming is exactly what it sounds like. Crops – usually leafy greens – are organized in vertical racks and grown in a controlled environment indoors.

This center is a joint project between the Institute of Advanced Learning and Research in Danville and Virginia Tech. It conducts research and does outreach education on controlled environment agriculture, and works with companies in this field.

Evans is also the director of the School of Plant and Environmental Sciences at Virginia Tech and specializes in CEA.

Unlike greenhouses, indoor vertical farming facilities don’t need translucent or transparent buildings. This means they can be located in “renovated buildings or warehouses built from scratch,” Evans said.

There’s no one formula for indoor vertical farming, Evans said. All systems are slightly different.

AeroFarms runs an aeroponic system, meaning that plant roots are misted with “targeted nutrients, water and oxygen,” according to the company’s website.

“Our aeroponic system is a closed loop system, using up to 95% less water for leafy greens than field farming and even less than hydroponics, as well as a fraction of the fertilizers,” the website says.

This is similar to most controlled environment agriculture systems, which can conserve and recycle resources.

And there are other advantages to CEA, including a year-round growing season, quicker harvests, more production in smaller areas, and the ability to farm in places that wouldn’t be suitable for traditional agriculture, like brownfields and on non-arable land.

“A field farm may only get one to three harvests a year,” said Marc Oshima, co-founder and chief marketing officer of AeroFarms.

AeroFarms also uses less than 1% of the land required by traditional agriculture to achieve the same harvest volume, according to its website.

“That means we are over 390 times more land efficient than field farming annualized based on our vertical nature of growing and up to 26 harvests per year,” the website says.

“Over the past five years, I wouldn’t say there’s been an explosion, but there’s been a rapid increase in the amount of indoor vertical farming that’s occurring,” said Chris Mullins, indoor agriculture extension specialist at Virginia State University.

The Virginia Department of Agriculture is working to obtain a count of the number of indoor vertical farm operations there are in the state, said spokesperson Michael Wallace.

But right now, there’s no official list of operations.

The Grand View study attributes this growth to rising population, which is causing increased worldwide demand for food.

Mullins said growth has also been driven by a decrease in the cost of technologies needed for indoor vertical agriculture, especially LED lighting, which is typically the main light supply for the crops.

And venture capitalists and other investors have become more interested in indoor vertical farming because of the environmental benefits, Mullins said.

Indoor vertical farming is expensive to get into, Mullins said. Plus, it’s necessary to have a management and workforce that are very knowledgeable about this method of agriculture.

But after the upfront investment, there can be some cost savings, too.

“Sometimes these are very automated systems,” Mullins said. “They can operate the system robotically, and fewer people are needed. There’s less manpower involved.”

Despite many competitive advantages, there are challenges to indoor vertical farming.

“You have a lot less reaction time,” Mullins said. “If you do get a pest or disease problem, it can very quickly spread. You have to constantly look for issues, and that’s where the management knowledge comes in.”

Although monitoring the system can be automated, “somebody still has to read those numbers and look at labor productivity,” Mullins said. “These aren’t systems that you can just leave alone for extended periods of time.”

And indoor vertical farming is most suited to growing leafy greens and culinary herbs. It doesn’t work as well for other crops.

For this reason, traditional farmers likely don’t see CEA as a threat when it comes to jobs, Wallace said.

“I’m not aware of any concerns about that,” he said. “The crops grown indoors are usually different than the crops grown outdoors.”

Another reason that CEA might be non-threatening to traditional farmers is because it won’t eradicate field agriculture. Mullins said he thinks there will be a shift toward more controlled environment agriculture in the future of farming, but not a total replacement.

“It’ll always be a combination,” Mullins said. “[CEA] won’t take over, but certainly it’s going to chip away.”

Evans agrees. It’s not going to be “this or that,” he said.

“We face a whole lot of environmental issues going forward,” he said. “Lots of issues that we need to work on. We’re going to have issues related to food supply in the future. …Controlled environment ag, with vertical farming being a subset of that, is another tool in the toolbox for us to produce safe healthy foods in the future.”

This is part of AeroFarms’ vision, according to its website. The company works to “protect the environment for future generations, growing more while using less.”

And despite the potential for automated systems, the AeroFarms operation in Danville-Pittsylvania County will have over 158 employees. The company initially planned to bring 92 jobs to the area, announcing an additional 66 jobs in July.

Virginia Tech and the Institute for Advanced Learning and Research are helping AeroFarms with workforce development assistance and plant testing.

The company has over 250 standard operating procedures, meaning “we are able to take unskilled workers and transform them into productive farmers,” Oshima said.

A group of 75 people, including state and federal elected officials and Virginia Secretary of Agriculture Matt Lohr, will be at the ribbon cutting today at 1 p.m.

The Pittsylvania location is AeroFarms’ second commercial indoor farm, with the first in Ithaca, New York. The Virginia operation will distribute its leafy greens and microgreens primarily to the Mid-Atlantic and Southeast region.

This operation is part of a larger interest in controlled environment agriculture in the Danville-Pittsylvania area.

The Danville Controlled Environment Agriculture Innovation Center is partnering with Indoor Ag-Con, an indoor agriculture trade show, to put on a CEA summit in October.

This event’s audience will include CEA thought leaders, researchers and experts, with the goal to increase collaboration and partnerships to drive growth in this field.

The Controlled Environment Agriculture Innovation Center is located just a few miles from the AeroFarms facility.

“We meet with AeroFarms quite regularly,” he said. “We have a very cooperative relationship and expect that to grow in the future.”

What will it take to grow manufacturing in Virgini...
Can Danville be a model for the country? Maybe it ...