Governor Terry McAuliffe announced today that Hardide Coatings, Inc., a manufacturer of advanced surface coatings, will invest $7.25 million to establish its first Virginia operation in Henry County and create 29 new jobs with an average salary of $50,000, which is well above the average prevailing wage in the region. Virginia successfully competed against Oklahoma and Texas for the project, which is a result of the Governor's meeting with company officials outside London during the 2014 Farnborough International Airshow.

Speaking about today's announcement, Governor McAuliffe said, "Creating jobs in the advanced manufacturing sector is critical as we work to build a new Virginia economy. I am thrilled to announce these new jobs, which pay well above the average prevailing wage for the region.I had the opportunity to meet with company officials last summer in the U.K. about this project,and we are honored to welcome Hardide Coatings to the Commonwealth's growing roster of international companies."

"This is a big win for rural Virginia as the region continues its economic rebound," said Maurice Jones, Virginia Secretary of Commerce and Trade. "Hardide Coatings is a growing global company, and this significant investment to expand its manufacturing presence to serve worldwide customers is a great testament to the strong workforce and infrastructure in place in Martinsville-Henry County and the Commonwealth as a whole."

The video you're about to watch is astonishing.

In it, GM engineer Jim Mero beats VIR's Grand West Course into submission with the mallet that is the 2015 Chevrolet Corvette Z06.

Mero and the Chevy team spent a few days at the track with a bone-stock car, and this video is the fruit of the effort. It's a scalding 2:41.3 lap time, which is enough to put the Z06 in the ring with some of the world's most brilliant supercars.

Which machines do I speak of? By comparison, our friends at Car and Driver recently whipped out a 2:43.1 time in the Porsche 918 Spyder. It's the fastest anyone from the magazine has managed to lap the course.

Watch it go down, as captured by the Vette's Performance Data Recorder.

The Corvette in the video is running heavy-weight oil and the most aggressive suspension settings detailed in the owner's manual. Other than that, it's just Mero coaxing crazy velocity from the car.

The dude's no stranger to whipping a Corvette around, and anyone who knows him will tell you he's one hell of a driver. If his name sounds familiar, it should. He's the man who scalded the Nürburgring with the C6 ZR1 not so many years ago:

Speaking of the Nurburgring, it's no secret that GM will take another stab at the Green Hell with the new Z06. We can't wait to see what Mero does there.

Speaking about today's announcement, Governor McAuliffe said, "Monogram Food Solutions is a major employer in Martinsville-Henry County, and an investment of this caliber creating 200 new jobs is a tremendous win for the region as it continues to rebound economically. The company is putting more people back to work and helping to diversify the industry base, both of which are critical for building a new Virginia economy."

"Today is a great day for economic development in Virginia," said Maurice Jones, Virginia Secretary of Commerce and Trade. "Strengthening relationships with existing businesses is essential to the economic vitality of the Commonwealth, and Monogram Food Solutions continues to thrive in our welcoming business environment. The company's decision to grow its operation in Henry County is a great testament to the advantage of doing business in Virginia."

TMI Auto Tech, exclusive North American manufacturer of the Ariel Atom vehicle, has been awarded an $838,000 grant from the Virginia Tobacco Commission to develop a new sports car, the Spider. The project is anticipated to create 19 new jobs.

The closed-body Spider is different from the Ariel Atom and will be made of lightweight, high-strength woven carbon composites.

TMI partnered with the Halifax County Industrial Development Authority back in March to submit the grant to the Tobacco Commission.

The market for the Spider is a familiar one for the company: club racers, promotional vehicle purchasers and school car programs. TMI hopes to build 100 of the vehicles for international distribution over the next five years with the starting price of $135,000. 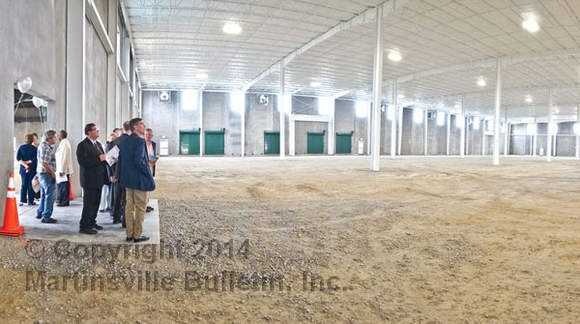 A new shell building at Patriot Centre at Beaver Creek officially is on the market.

Hall described the shell building as "a true partnership" between the county, the city, the EDC, the county Industrial Development Authority (IDA) and other area organizations and businesses.

This collaboration has proven that the shell building program can and will be successful, Vaughn said.

"For the proof, you just have to look across the street to Commonwealth Laminating and Coating, or ... to RTI Metals Inc." Vaughn said, as both of those businesses have moved into shell buildings in the Patriot Centre.

Ready for a comeback?

In 2006, a joint subcommittee of the Virginia legislature studying the needs of the manufacturing sector and the future of manufacturing in the commonwealth found disturbing statistics.

The numbers haven't improved since then.

In June, the Virginia Employment Commission reported Virginia's manufacturing employment at 229,100, a more than 20 percent dip in a decade.

Despite those statistics, the outlook for manufacturing in Virginia seems to be improving.

You have to look no further than a recent announcement by China's Shandong Tranlin Paper Co. Ltd., which says it will invest $2 billion in an advanced manufacturing operation in Chesterfield County. It is expected to employ 2,000 workers by the end of the decade.

Sky Valley Foods, a North Carolina-based maker of natural and organic sauces and salad dressings, announced today that it is relocating to Airside Industrial Park in Danville, where the company expects to expand its business and add new product lines.

"This project brings a wonderful addition of new jobs to our region," Mayor Sherman Saunders said." We have a major food processing company just down the street, and now a second food processor joins Nestle in Airside Industrial Park. Sky Valley Foods will be a significant contributor to our local economy, and I welcome them with a hungry appetite."

The company produces salad dressings and specialty sauces, including condiments, marinades, salsa and pasta sauce, for the natural and organic food consumer. Its branded products are Bella's, Organicville, Sky Valley and Simply Delicious. 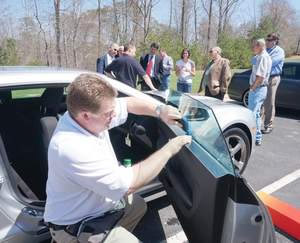 The Center for Advanced Film Manufacturing offers a renaissance for Martinsville and Henry County, according to local educational leaders.

Students who enroll in the program will be able to take a new 28-credit Advanced Film Certification program offered through PHCC; take classes at PHCC and NCI; access equipment at Eastman and Commonwealth Laminating; have potential hands-on internship opportunities; and have a leg-up when seeking employment at area advanced manufacturing facilities.

Speaking about today's announcement in Martinsville, Governor McAuliffe said, "Securing an investment of this magnitude and 155 new jobs for a region that is continuing to rebound economically is a tremendous win for Virginia and a major step towards growing and diversifying our economy. This competitive project is another illustration of the Commonwealth's leadership in the aerospace industry. We are thrilled that Henry County will be home to Kilgour Industries' first U.S. operation, which will enable the company to meet increased demands and expand its customer base."

"More than 236 aerospace firms call Virginia home, and today we celebrate the addition of Kilgour Industries to the roster," said Maurice Jones, Virginia Secretary of Commerce and Trade. "This high-tech manufacturing company is an excellent fit for Henry County to continue to diversify its economy, and we look forward to Kilgour's future success in the Commonwealth."

Companies, employees and economic development professionals in the Dan River Region have been participating in a workforce readiness pilot program in Virginia since June.

This program would allow the region to be recognized by ACT as a Certified Work Ready Community by helping individuals obtain a National Career Readiness Certificate. ACT is a not-for-profit public trust dedicated to helping people achieve education and workplace success.