Danville, VA (June 2, 2011) - Virginia’s newest regional economic development organization, the Southern Virginia Regional Alliance (SVRA), has hired Leigh Cockram as the organization’s first Director. Cockram is currently the Vice President of the Martinsville-Henry County Economic Development Corporation, and has been actively involved in the formation of the SVRA since March 2010.

SVRA is a marketing partnership between Halifax, Henry, Patrick, and Pittsylvania counties and cities of Martinsville and Danville, created to promote economic development and job creation in southern Virginia. It will be funded over two years with $200,000 from the Virginia Tobacco Indemnification and Community Revitalization Commission, $200,000 from the Virginia Economic Development Partnership and $200,000 combined from the six communities of the alliance for a total of $600,000.

“Leigh’s knowledge of our region and this initiative made her a great candidate for the Director position,” said Mike Sexton, Executive Director for the Halifax County Industrial Development Authority. “Each of our community’s economic development offices looks forward to working with her on promoting the SVRA.”

“I was delighted to hear that the Southern Virginia Regional Alliance had hired one of their own to head up economic development efforts in Southern Virginia,” said Lieutenant Governor Bill Bolling. “Leigh Cockram has done a great job in Martinsville and Henry County, and she now has an opportunity to make a positive impact for the entire region. Leigh knows the region well, she understands the importance of regional cooperation in achieving economic development goals, and she has great relationships with public and private sector partners. I know Leigh will do a great job, and I look forward to working with her to advance our efforts to support economic growth and job creation throughout Southern Virginia.”

“I am honored to have the opportunity to continue working with the SVRA team to market our region as the ideal place for businesses to locate,” said Cockram. “Southern Virginia has a wealth of opportunities for companies looking to grow, from great industrial parks to first class training facilities. I am confident that marketing our assets collectively will have a much bigger impact to site selection consultants and company executives who are searching for new places to do business.”

Tobacco Commissioner and Delegate Don Merricks said, "Regionalism is a must as we market Southern Virginia to prospective business and industry clients. I am pleased that we will have a Southern Virginia native heading up this initiative. Leigh has the experience and communication skills to market our area the most effective way possible. I look forward to working with her as we move forward."

“The Virginia Economic Development Partnership (VEDP) is proud to be a partner in this collective marketing initiative for Southern Virginia,” said Jeff Anderson, VEDP President and CEO. “We anticipate great results, and the SVRA has already been recognized by Southern Business & Development Magazine as one of theTen Notable Collective Economic Development Efforts in the South. We are excited about the opportunity and look forward to working with Leigh Cockram to market the region.”Cockram, a 2002 graduate from the University of Virginia and native of Henry County, will begin her duties with the SVRA on June 15th. 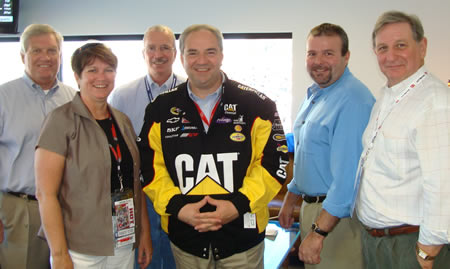 The Southern Virginia Regional Alliance, with the support of Lt. Governor Bill Bolling, and the Virginia Economic Development Partnership (VEDP) got their first regional marketing effort started at Martinsville Speedway. SVRA is a partnership championed by the Lt. Governor that includes Halifax, Henry, Patrick and Pittsylvania counties as well as the cities of Martinsville and Danville.

The effort included 10 invited site selection companies as well as companies that are looking to expand or relocate operations and showcased the southern region of Virginia over the weekend of October 22 through the 25. It also included a presentation on the region's workforce, regional assets such as industrial parks and shell buildings, education and quality of life.

“An effort like this is a massive undertaking and was hugely successful thanks to the involvement of  Lt. Governor Bolling and VEDP. I can’t say enough about how well the regional partners worked together to bring this first event together. I think all of Southern Virginia can be very proud of what was accomplished in the region over the weekend,” said Mike Sexton, Industrial Development Authority of Halifax County Executive Director.

Economic Development directors from throughout the region showed their support of NASCAR driver Jeff Burton, a regional native from South Boston, and presented Lt Governor Bolling with a jacket as a thank you for his support of the region.